We've Tried That Before: Introducing Change to Staff

So, 2020 wasn’t quite the year of vision that you had hoped for, but at least you have had plenty of time to catch up on reading. That pile of journals that used to sit on the desk are read and you’ve broken your all-time personal best for the number of webinars that you’ve attended. The office is tidier than it’s ever been and, having had some thinking time, you have some great ideas on how you can improve the patient journey and your business going into the new year.

Excited about the opportunities that lie ahead, you call a staff meeting and present your ideas to the whole team. As you finish you ask for feedback and you get the dreaded response:

“We’ve tried that before and it doesn’t work”

The words that have killed thousands of ideas before they have even had a chance to be tested. Who do these words come from? It’s always the older members of the team. The receptionist who has been in the office since it opened. The founder, who you bought the business from a few years ago, and who still comes in to see patients a couple of days a week. The soon to retire office manager who has 30 years of experience managing optometric offices. These are the naysayers who seem intent on destroying your creativity, and to make it worse the very act of them saying what they think in front of the rest of your staff creates a steep slope for you to climb and execute your plans.

It’s important to recognize the position that these comments come from. At their heart they stem from the human characteristic of wanting to avoid change. Why? Well change is difficult and the longer that any particular set of circumstances or behaviours has been in place, the harder it is to change them. Think of learning any manual skill, the less experienced you are the faster it is to learn and then adapt to a new way of operating. The other factor is pride, which masquerades externally as “experience”. People who have been in the job for a long period of time will, inevitably, view themselves as being successful at what they do. To suggest to them that they work in a different way can easily be seen as a direct criticism of the way in which they have always operated. Why change what has worked in the past? 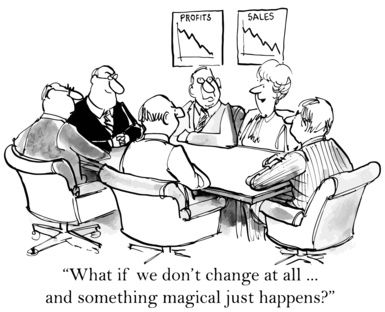 With this in mind, let’s go back to the genesis of your idea. You know the people who are likely to be resistant to change - involve them in your ideas at an early stage. A neat way of doing this is to present your ideas informally as a draft. Presented correctly, there is no downside to a draft. If you get a negative response to a draft idea then it’s OK – you can write it off as a draft and thank the person for the feedback. If you get a positive response, then you’re a genius!

“Hey Jane, I’ve been thinking about something and would really appreciate your experienced advice. It’s just a thought at the moment, what do you think about x?”

By phrasing the question in this way, you are recognizing your colleagues' experience and creating space for dialogue. Of course, the answer might come back: “We’ve tried that before and it didn’t work”, but now you have created the environment for follow up and enquiry:

“That’s really interesting, what was it that, specifically, went wrong?” “What was it that led you to trying it last time?” “What did you think about the idea when it was tried last time?” These are all questions that give you an insight into the mind of the person most likely to reject the idea. More importantly they give you the chance to pressure test your concepts. What you should be trying to understand is: what was it about the situation at the time, or the execution of the idea that caused it to fail?

With this information gathered, you now have a chance to reframe the presentation of your ideas. Now it could be that your colleagues were correct, and the idea is a non-starter. But assuming that it isn’t, there are now a few things that you can do to try and get your idea adopted.

The second thing to do is to frame your idea in the context of what has happened before and apply it to the current situation; “A few years ago I know we tried x, speaking to Jane I understand that it failed because of y & z. The current situation with respect to y and z has changed and so, because of (other compelling circumstances), I’m proposing that we do….”

The third, and final, way of getting any controversial idea adopted is to position it as a test. As with a draft, there is no downside to a test. The trick is to have clearly defined and measurable criteria for success and ensure that everybody is trained and appropriately incentivized to execute it within a clear time frame.

- Understand that resistance to change is a normal human response, don’t write it off, but try and learn from the experience of others.

- If you are proposing an idea that, it is claimed, has been tried unsuccessfully before, work to understand what the circumstances that surrounded its failure were. Ensure that these have either changed, or change them, before executing.

- Testing new ideas is a safe way of introducing them, as well as a great way of continuing to innovate.

Ian is an independent optical business consultant, motivational speaker and coach with over 30 years’ experience working in the global vision care business. He has a unique perspective on eye care having worked in all major markets around the world. He is able to combine his clinical knowledge and experience with insights into business gained through executive positions in one of the world’s biggest health care businesses. He is a sought-after speaker, having lectured around the world and given key note speeches to audiences of up to 25,000 people. Ian supports innovative start-up companies in the development of commercial propositions and is a regular consultant to investment analysts on the global optical business. An optometry graduate, Ian worked in hospital, private practice, academic research, and teaching roles before going into the contact lens industry. Ian is currently Master of The Worshipful Company of Spectacle Makers, the oldest optical professional body in the world.

5 Strategies to Beat Burnout in Your Practice

How to Build Relationships to Establish Lifelong Patients in Your Practice